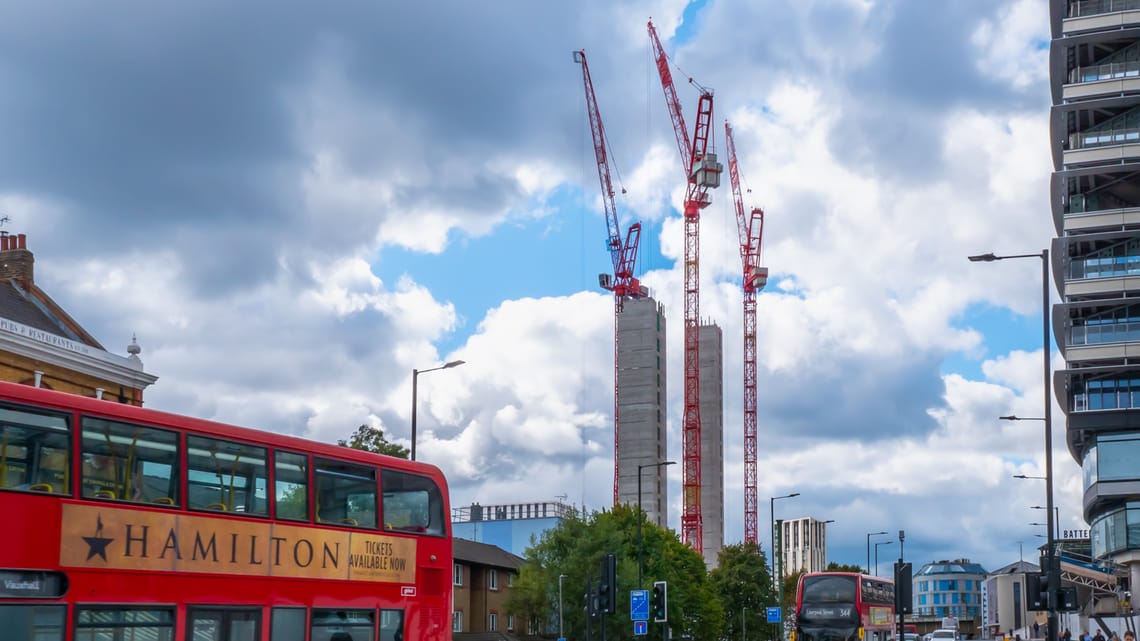 The Palmerston Court development in London left little room for cranes on site. Located on the south side of Battersea Park Road, opposite the new Battersea Power Station development, this mixed-use development needed three tower cranes to meet the customers requirement. Overcoming the challenges required careful planning, and the 28th layout was the final one accepted for the project.

The construction of the four buildings required the use of three tower cranes. WOLFFKRAN proposed two WOLFF 224 B and one WOLFF 355 B tower cranes, all with 35 m long jib and tower height between 60-77 m. However, the key was carefully locating the cranes to overcome project challenges.

Overcoming the lack of space

"The main issue with placing cranes on the Palmerston Court project was the lack of space. Four buildings fill the site, so two cranes had to fit between the buildings, and the third is squeezed between the site boundary and one of the buildings. So tight is the third crane that the building cladding cannot fit between the crane and the concrete structure, so the cladding can only be placed once the crane has gone. So the final layout was the 28th drawing, with most of them having the crane positions tweaked slightly to get them to miss the buildings, the walls and columns in the basement that the central two cranes were found in." Explained Bernard Holman, WOLFFKRAN Engineering Manager.

The railway line running past it on both sides of the construction site also needed to be secured. For that reason, the lifting capacities were reduced by 25%, and the cranes were electronically zoned to prevent loads from being lifted over the railway line boundary. The cranes were also fitted with AMCS, an anti-collision system.

Great care was also taken in planning the dismantle of the TC2 crane, which must be dismantled last and is the most difficult to remove. Due to the railway line running from both sides of the project, the mobile crane can only be set up in one place, Palmerston Way. This location is exceptionally unfavourable as upon completition, a 62 m high building will be standing between the mobile crane and TC2.

Andy Webster, WOLFFKRAN Operations Manager, explained the solution: ''WOLFFKRAN will use a versatile 450 t mobile crane with short outriggers and a reduced counterweight radius to fit into Palmerston Way. It will be rigged with a 28 m luffing fly jib, which still has enough capacity to remove TC2 while still being under 75% capacity for the rail line.''

''WOLFF cranes that we have at Palmerston court cannot be faulted, especially the 355 B.'' said Peter Rabbette, Lifting Operations Manager for MACE. ''The E & D & service teams who have visited the project have always been proactive and will go above and beyond to help us.'' he continued.