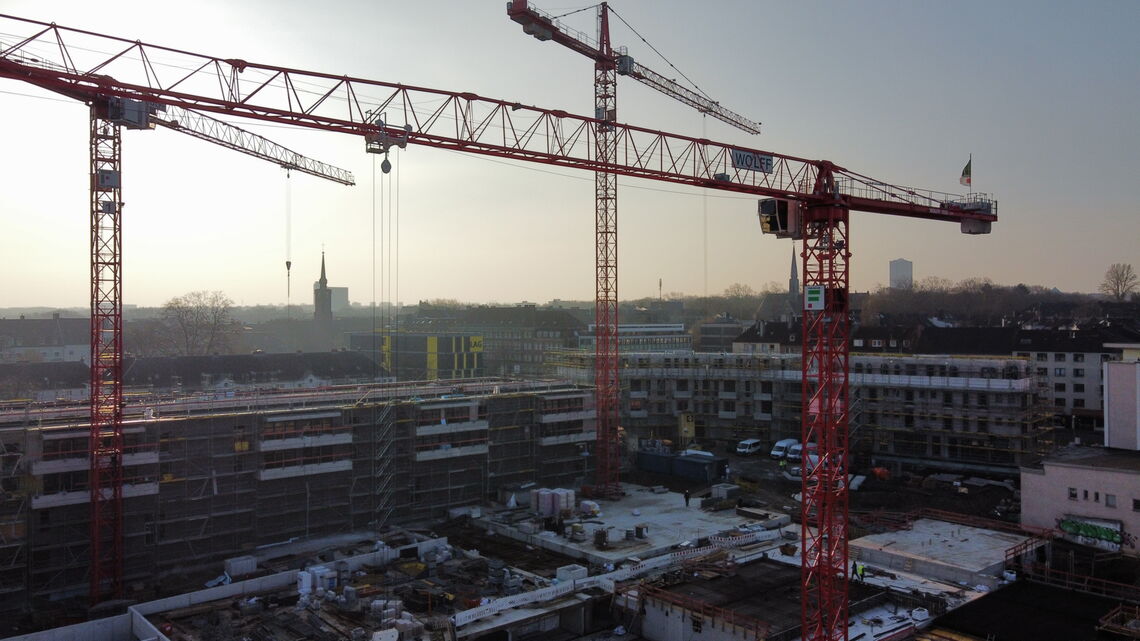 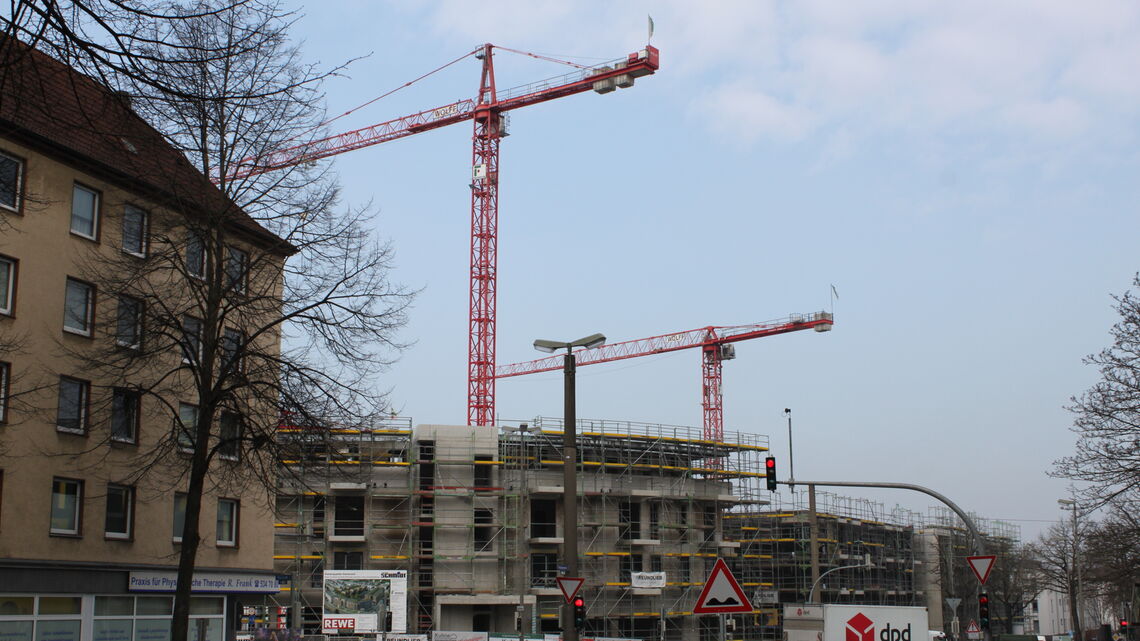 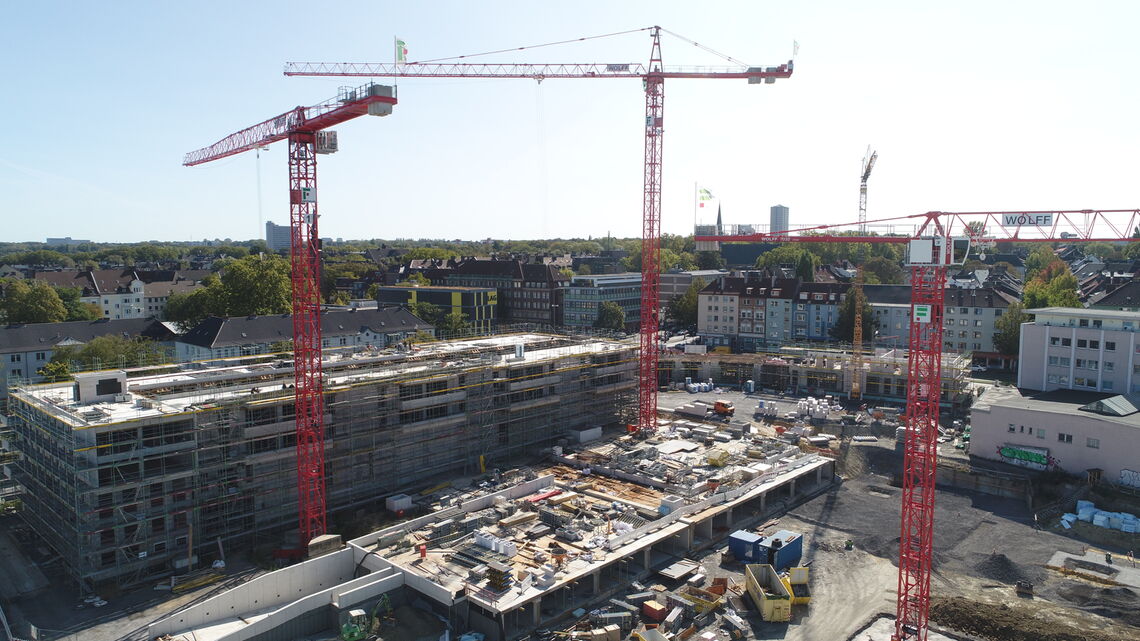 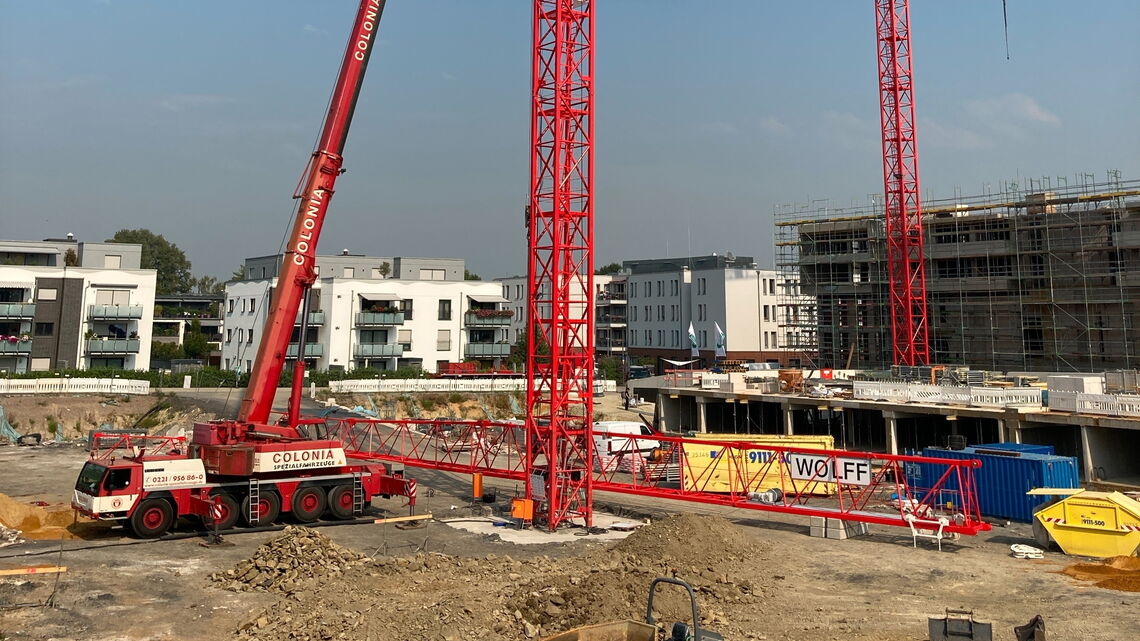 Dortmund – Juni 2021. Dortmund is seeing the construction of some 130 apartments catering to wide range of needs. The new Kaiserquartier (translates to Imperial Quarters) that is being built on behalf of Eric Schmidt Kaiserquartier GmbH will include everything from affordable apartments for students to luxury penthouses, as well as commercial spaces for offices, stores and medical practices and an underground car park. General contractor Freundlieb Bauunternehmen GmbH u. Co. KG is using three high-capacity WOLFF trolley jib cranes on the 15.600 m2 construction site.

In keeping with the times, Freundlieb is building the new Kaiserquartier largely with prefab components. All balconies, loggias, and staircases are prefabricated and have to be lifted into place in one piece, with the heaviest element weighing roughly 10 tonnes. In order to cover the 15.600 m2 site with just three cranes, the concept called for cranes with tip load capacities of five to six tonnes at 50 to 60 meters. As a result, Freundlieb opted for a 315 tm WOLFF 7532.16 Cross and two 250 tm WOLFF 7032.12 Clear cranes. Thanks to the low assembly heights of the two flat-top WOLFF Clear cranes, the crane concept was kept as low and thus as cost-efficient as possible in spite of the overlapping jibs.

Given the size of the construction site and the excavated depth of around four meters, the assembly of the cranes from the surrounding streets would have been inefficient. Therefore, a 30-meter-long ramp was raised inside the pit over which the mobile crane and trucks could safely access the designated assembly locations. Two of the WOLFF cranes were erected on foundation anchors in the floor of the underground car park and one on a cross frame outside the construction pit.

Even the dismantling of the cranes had to be carefully planned in advance. “With nearly the entire building superstructure constructed on the underground car park, many of open spaces and courtyards will not have the necessary load-bearing capacity for a 300-tonne mobile crane,” says Carsten Druske, Head of Rental Operations in Germany and Branch Manager of WOLFFKRAN Dortmund. “In addition, access will be limited by the new buildings, so that the crane parts will have to be lifted over them." WOLFFKRAN addressed the issue by planning places outside of the building complex from which the mobile crane can safely dismantle the WOLFF cranes. “Furthermore, the construction site’s slope also needed to be considered during the planning process in addition to the various building heights throughout the individual construction phases,” explains Druske.

WOLFFKRAN and Freundlieb – a successful team

“This project once again proved that a consistent point of contact and close collaboration during site planning are indispensable,” says Bertram Müller, Project Manager at Freundlieb Bauunternehmung. “Several on-site appointments with the WOLFF Team from Dortmund prior to the actual construction phase ensured an excellent crane concept and a smooth construction process,” says Müller.

Freundlieb and WOLFKRAN have already worked together on numerous other construction projects in the Dortmund area, as for example the recently completed medical and commercial properties in the Phoenix-See Redevelopment.