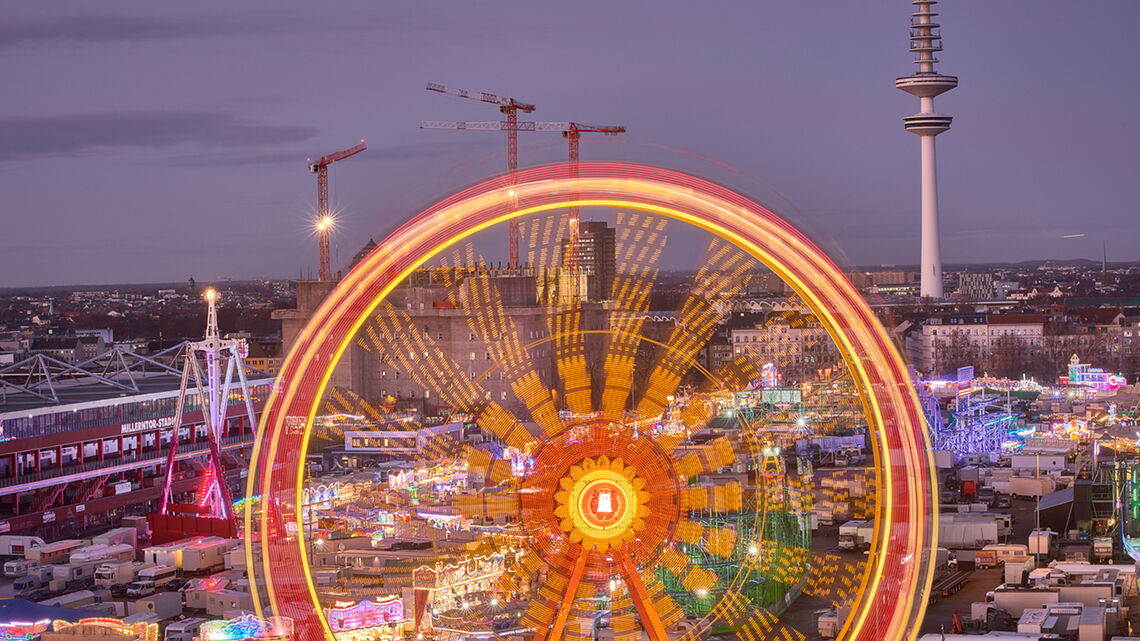 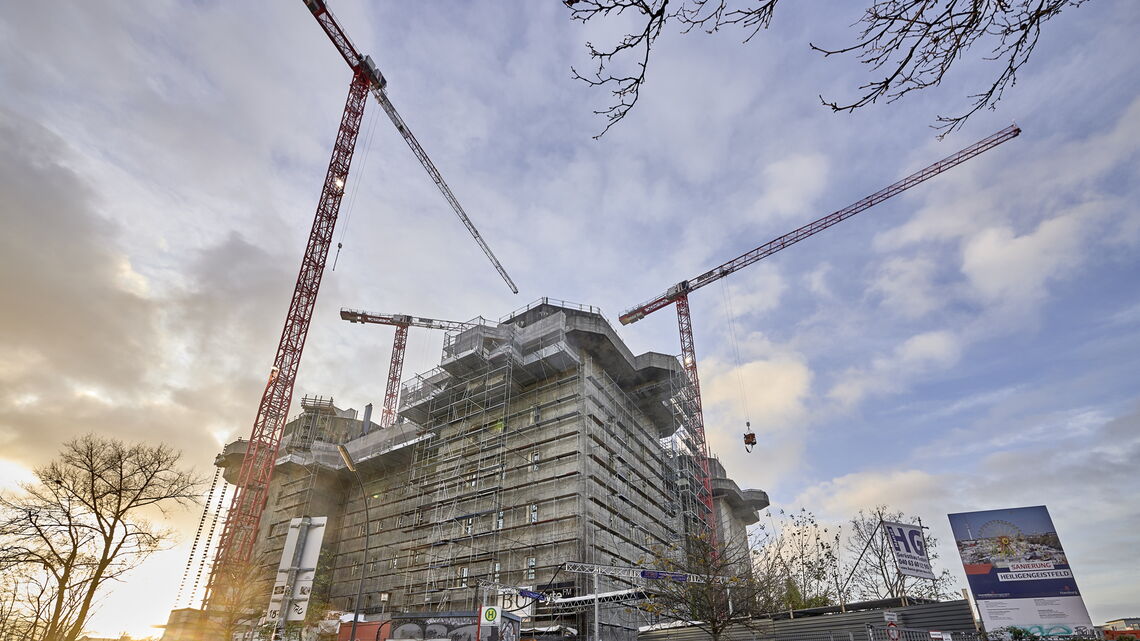 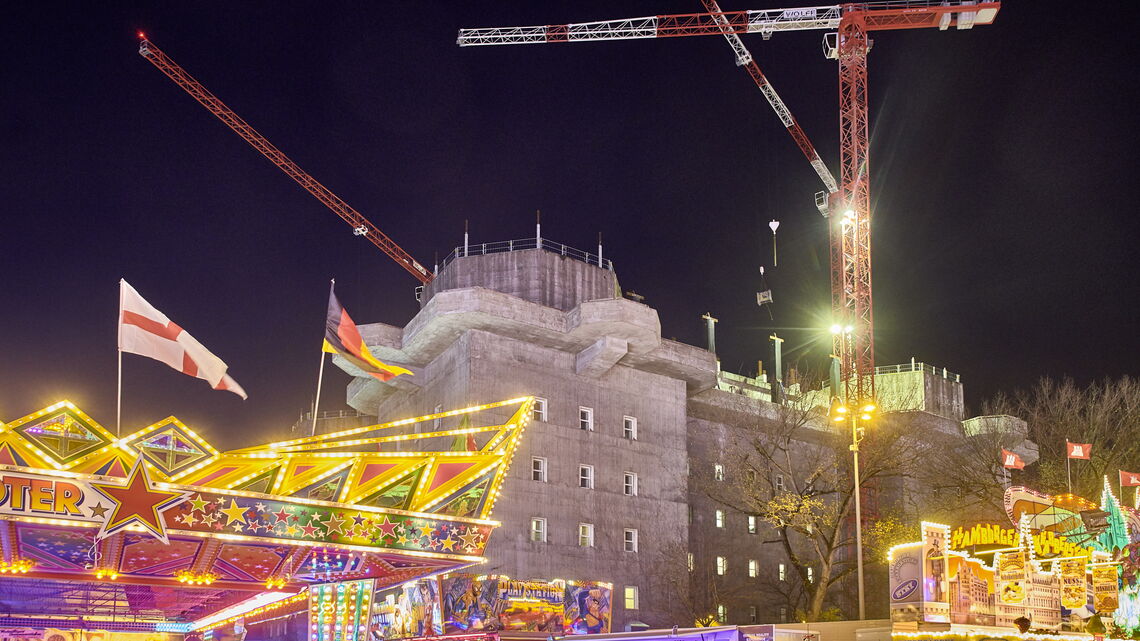 Amidst the colorful cityscape of Hamburg's St. Pauli district sits an imposing grey concrete colossus. Built in 1942, the Flak Tower originally served as an anti-aircraft bunker during the Second World War offering the residents of Hamburg protection from air raids. Today, the listed building is home to many up-and-coming cultural and media enterprises and a lively part of the district’s creative scene. In a pioneering landscape architecture project, the bunker is now being enhanced by the addition of five pyramid-like levels on its roof. The new construction will feature a public garden offering panoramic views across the Hanseatic city, as well as a memorial dedicated to the victims of the Nazi regime, various cultural and exhibition areas and a hotel. Construction work has been underway for nearly a year involving four WOLFF cranes commissioned by the civil engineering firm Georg Bähr GmbH.

The immediate vicinity of the bunker next to the Heiligengeist festival ground, home to the Hamburger Dom – Northern Germany's largest public fun fair – three times a year, posed a particular challenge for the crane team right at the start of the project. “Assembling the cranes during the fair was not an option due to the lack of space. Given that the fair is held on twelve weeks of the year, coordinating the time slots for the assemblies with the city authorities and the contractor was quite a task,” says Carsten Druske, Head of Rental Operations Germany and Branch Manager of WOLFFKRAN Dortmund.

The first cranes, two flat-top WOLFF 6031.8 clear, were assembled in four days in the summer of 2019 using a 500-tonne mobile crane with a luffing jib. Both cranes were erected from the same mobile crane bay, as it was difficult to find a place for the large mobile crane in the space restricted St. Pauli district. The third crane, a WOLFF 6031.8 clear, was erected in fall last year and the fourth, a WOLFF 6020.8 clear, in January of this year. All four cranes were assembled with their final freestanding hook heights of 88.4 m, 78 m, 70.2 m and 59 m, respectively. The high freestanding heights are necessary since the construction site is located at a height of about 30 meters on the roof of the bunker and the cranes could not be tied to the historically protected building. As a result, the WOLFF cranes have been erected on cross frames with 200 tonnes of central ballast. “In this way we were able to achieve high freestanding tower heights and cover the entire construction site with four cranes,” explains Carsten Druske.

Thanks to their flat-top design, the WOLFF cranes can slew very closely above one another and the overall crane concept thus kept relatively low. “The jibs are each only about 10 meters apart, saving both assembly time and costs,” says Druske.

Reliable and personal services from a single source

“The limited space around the construction site is also a key challenge with regard to the huge amounts of formwork, prefabricated parts and construction material that has to handled,” says Site Manager Falko Stephan of Ingenieurbau George Bähr GmbH, discussing the complexity of the project. Additionally, the Flak Tower is fully occupied by tenants posing further logistical and safety challenges. “Yet the collaboration with WOLFFKRAN has been solution-oriented and seamless both during the current construction phase and in the preceding planning phase, which included dimensioning of the crane loads and crane assembly,” says Falko Stephan. “We have come to value Carsten Druske from WOLFFKRAN as a partner who personally accompanies every step of the project and always finds a creative solution for any challenge.” Coupled with a one-stop package comprising a convincing crane and service concept from a single source at an excellent value for money, made it easy for the Dresden-based contractor to opt for the crane manufacturer from Heilbronn, confirms Falko Stephan.

Upon completion of the five-level extension of the St. Pauli Bunker in 2021, around 4,700 trees, shrubs, hedges, bushes and climbing plants will be planted high above the roofs of the city, providing the residents of Hamburg with an impressive new landmark and a natural oasis within sight of the famous landmarks “Elphi” and “Michel”.