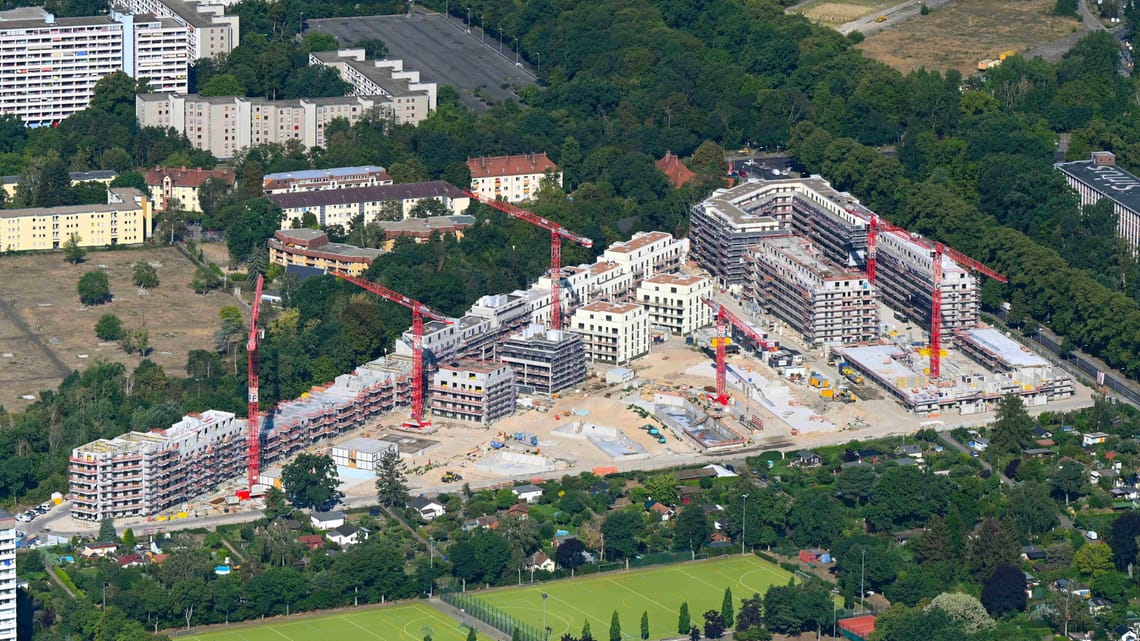 Berlin – December 2022. Since the summer of 2021, a new residential district aimed at alleviating the shortage of affordable housing in Germany's capital has been under construction in the so-called Siemensstadt neighborhood in Berlin's Spandau district. The "Halske Sonnengärten," named after Siemens co-founder Werner Halske, comprises around 960 family-friendly rental apartments, an underground parking garage, commercial space, and a daycare center. The last four cranes were recently dismantled in a demanding operation.

The new residential complex extends across a 60,000 m2 property and is entirely constructed with prefabricated elements. This required large cranes with high load capacities to lift walls, balconies, stair modules, and support columns weighing up to twelve tonnes. Since the cranes had to stand close together and slew above one another, Ten Brinke opted for six flat-top and one high-top crane. The flat-tops included three WOLFF 7032.12 Clear with 12 tonnes capacity and three WOLFF 7534.16 Clear with 16.5 tonnes capacity; the high-top was a WOLFF 7532.16 Cross with 16.5 tonnes capacity. "To keep the overall height of the crane concept low and economical, some cranes were fitted with half-height tower sections of 2.25 meters. As a result, the tallest crane on the site was under 50 meters high," explains Oliver Manthei, Head of Service Germany and Sales Dortmund.

The first cranes were erected in May 2021. In Spring 2022, two of the four cranes that were initially erected on foundation anchors in the underground car park were relocated to another building section, where they were erected with new configurations on cross frames. Including the relocations, the project thus involved the installation of nine cranes with a maximum of six on site at the same time.

While the erection work was smoothly executed routine, the team was confronted with a more difficult task when dismantling the last four cranes. "The cranes were partially located in the building center. On top of that, the mobile crane could not access any areas above the underground parking due to the weight load," says Manthei. As a result, the team had to dismantle the cranes from as far as 60

meters away using a 450-tonne mobile crane with a luffing jib. "The crane components had to be lifted out between the buildings. Since this is a very slow process when using just the mobile crane, we deployed an additional, smaller crane to support the operation," says Manthei. "We were also forced to interrupt a disassembly once because of a heavy storm. In the meantime, however, all WOLFFs have been successfully dismantled – ahead of the planned schedule."

"The cooperation with Wolffkran was smooth from the start. The dedicated team on-site responded flexibly to all requirements, and the cranes worked without downtime throughout," says Niek Hassink, project manager at Ten Brinke. The Dutch contractor previously built another residential project in Berlin with Wolffkran, and the two companies are currently working on a new office building in Dortmund.